Christopher Nolan, the voice of the crippled, died on February 20th, aged 43
瘸腿者代言人———爱尔兰残疾作家克里斯托弗•诺兰卒于2月20日，享年43岁 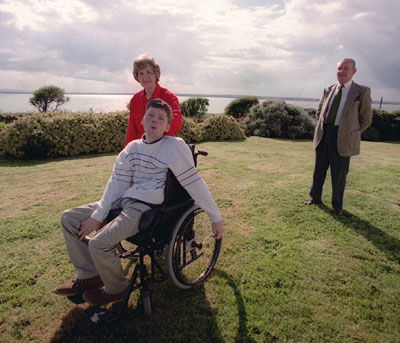 YOU wouldn’t have wanted to be Christy Nolan. His two arms looked normal, but they would fly out randomly, like a clockwork doll’s. “Dreadful deadly spasms” of cerebral palsy shot their way from his cranium to his spine and into his feet. He needed carrying to the bath, to the toilet, to bed; his long legs were good for nothing, collapsing under him like a deck of cards. When he tried to talk, nothing came out but “dull looks, dribbles and senseless sounds”. He could not even wipe the saliva from his own face.

In bed at night, when he was as able-bodied as anyone, he would rehearse what his “drunken, drooling body” could do, and what it couldn’t:

Can’t chew, can’t swallow, so why chew? Can’t call—can call, a famished moan maybe yet it suffices…can’t cry—can cry, can cry, can cry wet pillows full but who cares…can’t laugh—can laugh, can can can

At birth, at the County Hospital at Mullingar in Ireland, he had been deprived of oxygen for two hours. He should have died, but instead “sagaciously he dolefully held on”. People pitied him, stroked his head and said God was good, but even as a boy he was not so sure. The “closeted cossetted certainty of Christ” could always calm him, as could communion when Father Flynn was able to sneak the host between his spasming, locking jaws. But once, in St John the Baptist’s, he had himself wheeled to the life-size crucifix with its grey bloodied face and threw out his left arm in a great arc to give Christ two fingers, because he was to blame.

And yet, despite it all, he could use words. At the age of 13, he could write this:

For a long time, no one knew. He could communicate: yes with upshot eyes, a neck-bow for affirmation, a drubbing of feet on his wheelchair for attention. The IQ tests always went well, well enough for him to go to “ordinary” school at Mount Temple in Dublin. His blue eyes blazed with intelligence. But no one suspected that in his head were stored millions of words, “nutshelled” and ready. They included all the songs and stories he had heard from his father, the poems recited by his teachers, the alphabet-words stuck up round the kitchen by his mother, glittering fragments of Hopkins and Joyce and Yeats. His overriding ambition was how to “best his body” and get them out.

At the age of 11 he learned how. With a rubber-tipped stick strapped like a unicorn’s horn to his forehead, and dosed with a new pill that calmed his neck muscles a little, he picked out one letter, then another, on a typewriter, “by a bent, nursed, and crudely given nod of his stubborn head”:

His own mother cradled his head but he mentally gadded here and there in fields of swishing grass and pursed wildness. His mind was darting under beech copper-mulled, along streams calling out his name, he hised and frolicked but his mother called it spasms. Delirious with the words plopping onto his path he made youth reel where youth was meant to stagnate. Such were [his] powers as he gimleted his words onto white sheets of life.

Sometimes one word would take 15 minutes to write. It never got faster; his last work, “The Banyan Tree”, a novel based on his family’s farming history in Westmeath, took a decade. But as soon as he began to get the “beautiful words” on paper, he won competitions. Weidenfeld & Nicholson published his poems and writings when he was 15. The book was called “Dam-Burst of Dreams”, as it was. He could speak, and not just for himself, but for all the other, silent, damaged boys of the world.

Insults ran off him. Forgetfulness, he wrote, “fugues tongues and balms words”. He called himself a cripple unsparingly in his autobiography, “Under the Eye of the Clock”, which won the 1988 Whitbread Book of the Year. Some said disability got the prize for him, but what won it was the language, uncorralled and fresh as though the words had never been tried before. He made words do everything his body could not. Among his favourites were “frolicking” and “rollicking”; “hollyberries”, meaning compensations among the sharp things of life; and “crested”, meaning glorious, as though he lifted his head to say it.

Nothing could have happened without his parents. To the end, his mother gripped his chin as he wrote. They carried him on their shoulders, held him, one on each side, to let him ride a pony, steadied him in a stream to feel the icy water on the rocks beneath his feet. His mother had told him, when he was three and crying with frustration, that she liked him just as he was. From that point, “he [fanned] the only spark he saw, his being alive”.

Once, on holiday on the Burren, his family buried him standing up in sand, just his head and shoulders showing. He knew then what it felt like to be able-bodied and straight. But his head was at the level of people’s feet; so he asked to be returned to his wheelchair. He might loll and flop in it, “zoo-caged” as he was. But it was also his proud podium and his throne.